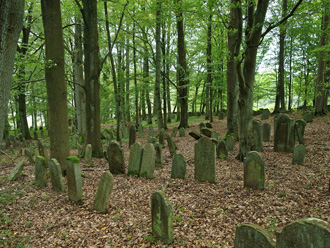 The focus of the commission has been the documentation of Jewish cemeteries in Hesse. Since 1981, old and historically important cemeteries have been researched, the grave stones photographed, inscriptions copied and translated, and supplemented with genealogical information from other sources including birth and death registries of the 19th century. Maps have been designed for some of the larger sites. Richly illustrated books have been published about a few of the important cemeteries.

Altogether 70 cemeteries with 17 000 gravestones from about 320 communities have been documented in this way.

Internet-Research: In order to make the results generally available they have been completely integrated into an online system run by the Hessian Institute for History and Geography, LAGIS. They have been supplemented by the data of smaller cemeteries, which had been reliably processed by third parties. So far 15 more cemeteries with more than 1 000 gravestones have been added. About 18 000 gravestones of 85 cemetries are currently searchable via the internet. The process is ongoing.